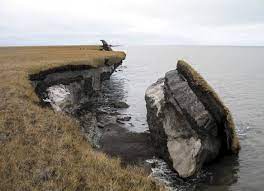 The Ministry of Earth Sciences informed the Lok Sabha that of the 6,907.18-km-long coastline of the Indian mainland, about 34% is under varying degrees of erosion, while 26% is of an accretional nature and the remaining 40% is in a stable state.