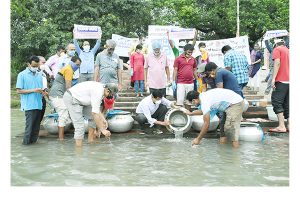 Over 10,000 fish fingerlings of Indian major carps — catla, rohu and mrigal — were released in the Ganga at Sangam nose under the ranching programme organised by ICAR-Central Inland Fisheries Research Institute (CIFRI), Prayagraj, recently.