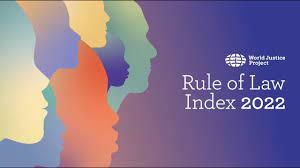 The report is a compilation of the ‘rule of law’ status across 140 countries worldwide.