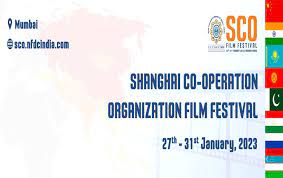 The Shanghai Cooperation Organization is to host a film festival in Mumbai.