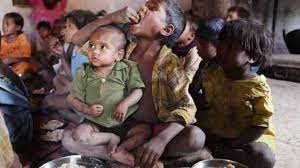 The Union government informed the Supreme Court (SC) that no starvation death (Death by Hunger) has been reported by any state or Union territory (UT) in recent years.