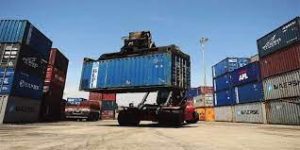 The central government has released Rs 206 crore to states for the promotion of exports under the Trade Infrastructure for Export Scheme (TIES) initiative.