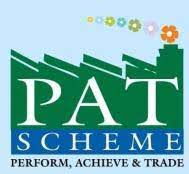 A recent report released by the Centre for Science and Environment (CSE) mentions that the Perform, Achieve and Trade (PAT) scheme introduced in 2008 is not effective.