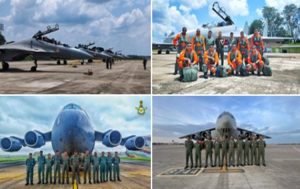 A contingent of the Indian Air Force left for Malaysia to participate in a bilateral exercise named ‘Udarashakti’.