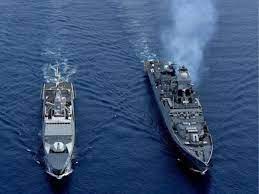 The 21st edition of the bilateral naval exercise between India and France, Exercise Varuna, has begun on the Western Seaboard on January 16th, 2023.