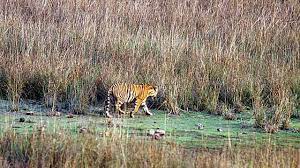 In a first-of-its-kind project, radio telemetry has been deployed to identify corridors used by tigers in the Vidarbha landscape, tracking their actual movement.