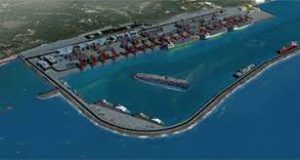 Adani Group approached the Kerala High Court requesting the security cover of central forces in its port construction site in Vizhinjam which was marred by violent protests by the Fishermen.