What Are Genetically Modified Mosquitoes? 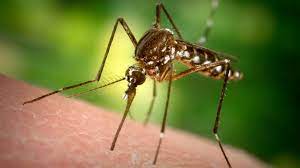 The US conducted an open-air study of genetically engineered mosquitoes which shows promising results.