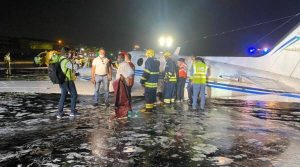 A medical flight made an emergency belly landing at the Chhatrapati Shivaji Maharaj International Airport in Mumbai after a wheel of the aircraft separated from its body. Mumbai airport officials sprayed foam on the runway to prevent fire as the Beechcraft VT-JIL aircraft made a belly landing.