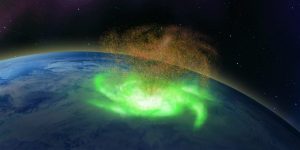 Scientists from China recently discovered a space hurricane for the first time ever above the North pole.