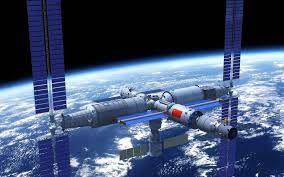 China launched the second of three modules to its permanent space station, in one of the final missions needed to complete the orbiting outpost by year’s end.