Why Neptune And Uranus Appear In different Colours? 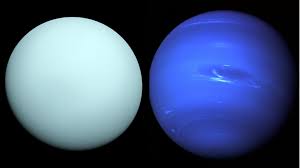 Astronomers now have an explanation for why Neptune and Uranus appear in different colours.