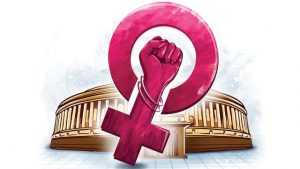 A political party has raised the demand of bringing the long-pending Women’s Reservation Bill to Parliament, ahead of the monsoon session.