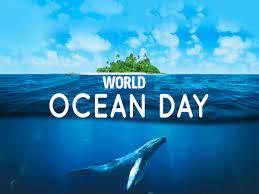 World Ocean Day was observed on June 8, 2022 with the theme for this year is “Revitalization: Collective Action for the Ocean”.