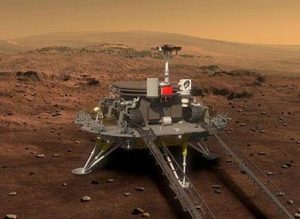 China’s first Mars rover will be named Zhurong after a traditional fire god.