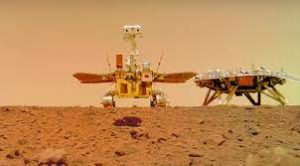 China’s Zhurong rover has peered under the surface of Mars and has found evidence of two huge floods that shaped the landscape.