The Sagarmala Programme was originally mooted by the National Democratic Alliance (India) government under Atal Bihari Vajpayee in 2003. In 2004, the NDA government was ousted from power. The UPA-I renamed this project as National Maritime Development Programme in 2005. At that time, the caThe concept of Sagarmala was approved by the Union Cabinet on 25th March 2015. As part of the programme, a National Perspective Plan (NPP) for the comprehensive development of India’s 7,500 km coastline, 14,500 km of potentially navigable waterways and the maritime sector has been prepared which was released by the Hon’ble Prime Minister, on 14th April 2016 at the Maritime India Summit 2016. 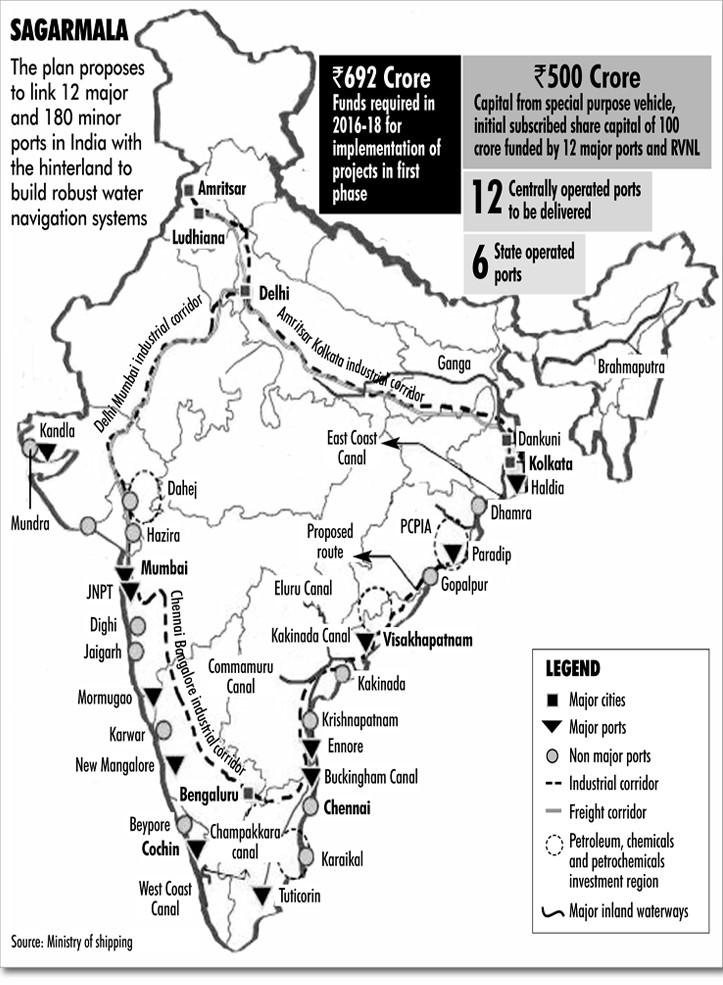 India is one of the fastest-growing large economies in the world with a GDP growth rate of 7.3% in 2018-19 and ports play an important role in the overall economic development of the country. Approximately 95 % of India’s merchandise trade (by volume) passes through seaports.

Connectivity to the ports is one of the major constraints in smooth movement of cargo to/from the hinterland. Around 87% of Indian freight uses either road or rail for transportation of goods. A significant share of these cargo experiences “idle time” during its transit to the ports due to capacity constraints on highways and railway lines connecting ports to production and consumption centres. Although water-borne transport is much safer, cheaper and cleaner, compared to other modes of transportation, it accounts for less than 6% of India’s modal split. By comparison, coastal and inland water transportation contribute to 47% of China’s freight modal mix, while in Japan and the US, this share is 34% and 12.4% respectively. Significant savings can be achieved by shifting movement of industrial commodities like coal, iron ore, cement and steel to coastal and inland waterways.

While cost differential between India and China is not significant on a per tonne-km basis, China still has a lower container exporting cost, than the cost in India, due to lower lead distances. Presence of major manufacturing and industrial zones in coastal regions in China, which were developed as part of the Port-Led Policy of the government is the main reason for lower lead distances

Any programme for port-led development needs to consider to effectively harness the potential of India’s long coastline. 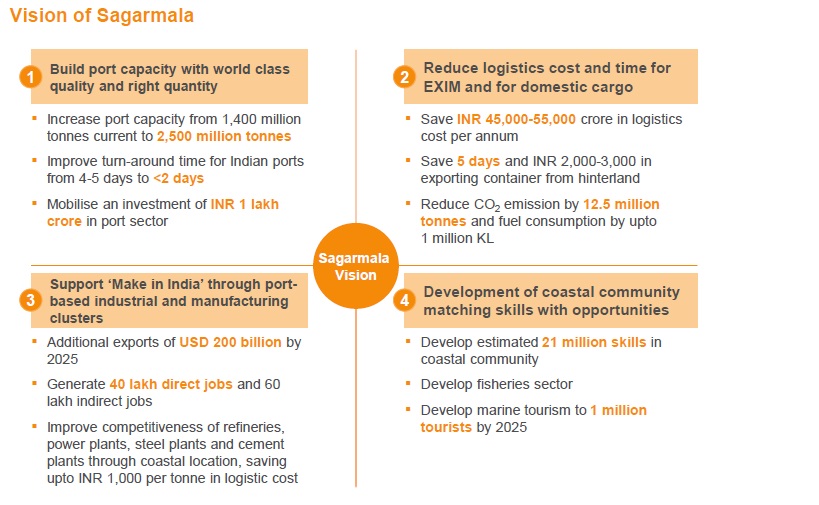 The objective of the Sagarmala Programme is to reduce logistics cost for EXIM and domestic trade with minimal infrastructure investment. This includes: 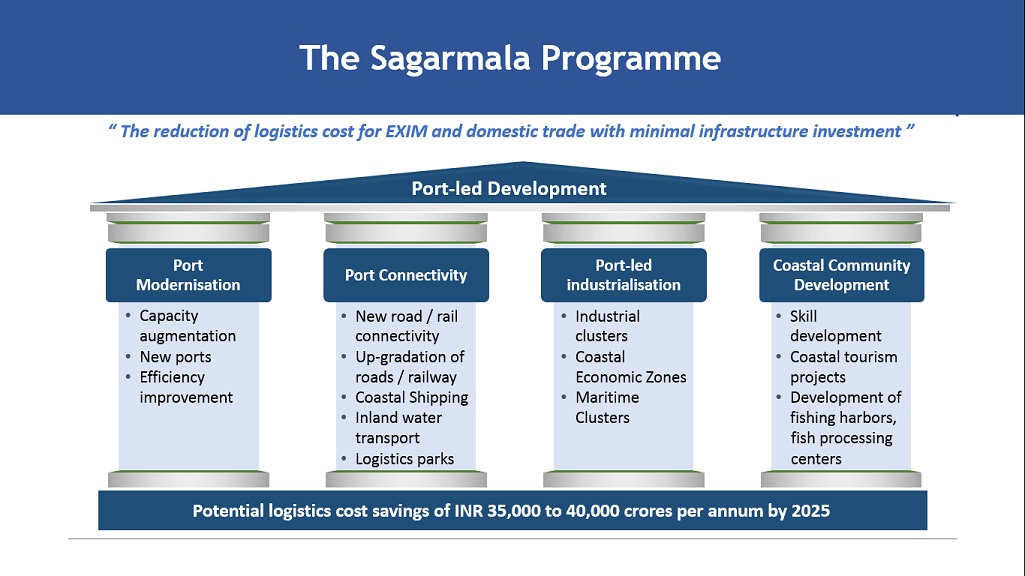 Components of Sagarmala Programme are:

As part of Sagarmala Programme, more than 574 projects (Cost: Rs. 6.01 Lacs Cr.) have been identified for implementation, during 2015-2035, across the areas of port modernization & new port development, port connectivity enhancement, port-linked industrialization and coastal community development. As of 30-September-2019, a total of 121 projects (cost: Rs. 30,228 Cr) have been completed and 201 projects (cost: Rs.309, 048 Cr.) are under implementation.

As 30 September 2019, a total of 493 projects were under various stages of implementation, development and completion.

Sagarmala Development Company (SDC): In September 2016, Indian Government has incorporated the Sagarmala Development Company (SDC) under Companies Act, This company will serve as a special purpose vehicle {SPV) in project development and also as a nodal agency for coordination and monitoring of Sagarmala project. Other functions include: Preparation of detailed master plans for the Coastal Economic Zones (CEZs) identified as part of the NPP and provide a framework for ensuring the integrated development of the Indian maritime sector. To manage the coastal community development scheme and fund coastal community development projects identified under the Sagarmala Project.

Sagarmala Coordination and Steering Committee: At national level, the government will constitute a Sagarmala Coordination and Steering Committee (SCSC)under Cabinet Secretary with Secretaries of the Ministries of Shipping, Road Transport and Highways, Tourism, Defence, Home Affairs, Environment, Forest & Climate Change, Departments of Revenue, Expenditure, Industrial Policy and Promotion, Chairman, Railway Board and CEO, NITI Aayog as members. This committee would provide coordination between various ministries, state governments and agencies connected with implementation and review the progress of implementation of the National Perspective Plan, Detailed Master Plans and individual projects.

At the Central level, the Sagarmala Development Company Limited (SDCL) has been set up under the Companies Act, 2013 to assist the State level/zone level Special Purpose Vehicles (SPVS).

Projects in which SDCL will take an equity stake, are expected to start giving returns only after 5-6 years. Therefore, SDCL will be supported during the initial 5-6 years through the budgetary allocation of Ministry of Shipping. At the State level, the State Maritime Boards / State Port Departments shall service the State Sagarmala Committees and also be, inter alia responsible for coordination and implementation of individual projects, including through SPVS (as may be necessary) and oversight. The State Governments / SMBs shall implement such identified projects either from their own budgets or through SPVS wherein the SDCL may provide equity support, as may be required and necessary

National Perspective Plan The Union Government would prepare a National Perspective Plan (NPP) for the entire coast of India integrating the IndustriaCorridors, Dedicated Freight Corridors, National Highway Development Programme, Industrial Clusters and so on. It will also identify the potential geographic regions called Coastal Economic Zones (SEZs). The coastal states have been suggested to set up State Sagarmala Committee to be headed by Chief Minister/Minister in Charge of Ports with members fro from relevant Departments and agencies.

Sagarmala project aims at port infrastructure development along the 7,500-km-long coastline through modernisation, mechanisation and computerisation. Under this port-led development framework government hopes to increase its cargo traffic three-fold in the next 5 years. It will benefit around 14 per cent of the country’s overall population from at least 13 States and Union Territories. If inland waterways programme is included in it will benefit at least 55 per cent of all population. Two ports Kandla (Gujarat) and Paradip (Odisha) are being developed into Green Smart Cities and the Government is aiming at 4,500 rupees profit from ports this fiscal. At Navi Mumbai Special Economic Zone, the government is investing 4,000 crore rupees which will provide employment to 1.5 lakh youth.

The latest update in the project:

With the enactment of landmark Recycling of Ships Act, 2019: taking up new projects under the flagship Sagarmala project are some of the important aspects which will play a vital role in EXIM Trade,17th Maritime State Development Council.

Currently, India recycles around 300 of the 1,000 ships which are demolished per annum globally. However, countries like Japan, Europe and the US were not sending their ships for recycling to India in the absence of ratification of a global convention. That scenario is set to change with the Recycling of Ships Act, 2019.

As per the World Bank report 2019 on Ease of Doing Business, India has taken a huge leap of 23 ranks from 100 in 2017-18 to 77 in 2018-19 indicating it is continuing its steady shift towards global standards. We welcome the government’s push for ‘Trading across borders’ which shows an impressive improvement from 146 ranks last year to 80th rank this year. Upgradation of port infrastructure, improvement of processes, and digitization of document submission has not only reduced Export/Import cargo handling time at ports but has significantly contributed towards improving the trading across border parameter and India’s impressive growth in the World Bank’s report.