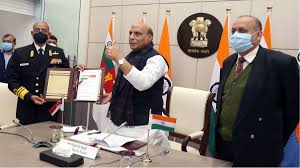 The 5th Defence Ministers’ Dialogue (DMD) between India and Singapore was successfully held on 20 January 2021 through a video conference.