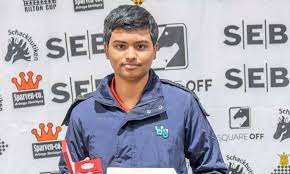 India has gained its 79th Grandmaster with the title being awarded to 16-year-old Pranesh M from Tamil Nadu.