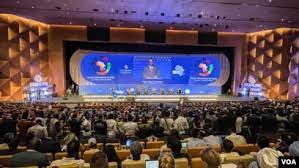 Minister of State for External Affairs, V. Muraleedharan has recently attended the 8th Dakar International Forum on Peace and Security in Africa.