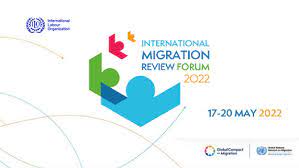 The First International Migration Review Forum (IMRF) is being held under the UN General Assembly (UNGA) in New York, USA. It started on May 17th and will end on May 20th.