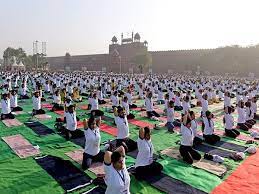 Eighth International Day of Yoga (21st June 2022) is being celebrated across the world.

Yoga and its Significance: