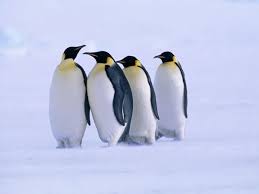 The emperor penguin, which relies on ice for breeding, is the most vulnerable of Antarctica’s species.