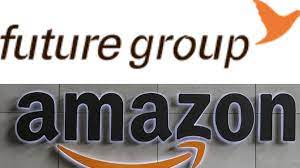 Amazon and Future Group have agreed to appear before the Singapore International Arbitration Centre (SIAC), the parties informed the Supreme Court (SC) recently.