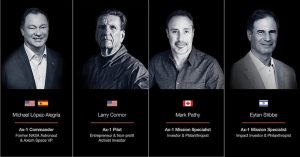 A former Israeli fighter pilot, an American technology entrepreneur, and a Canadian investor will be part of the crew of the first entirely-private orbital space mission.