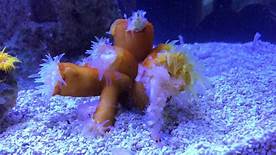 Scientists have recorded four species of corals for the first time from Indian waters. These new species of azooxanthellate corals were found from the waters off the Andaman and Nicobar Islands.