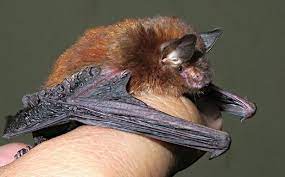 Scientists have discovered a new species of bamboo-dwelling bat near the Nongkhyllem Wildlife Sanctuary.