Ban On Mechanised Fishing Boats In The Mangalajodi Area Of The Chilika Lake: 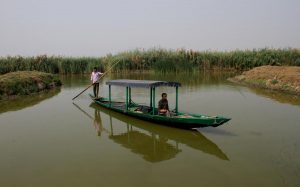 The Odisha government has proposed to ban movement of mechanised fishing boats in the Mangalajodi area of the Chilika lake, an important haunt of migratory birds, to provide the winged guests an undisturbed ecosystem for six months every year.