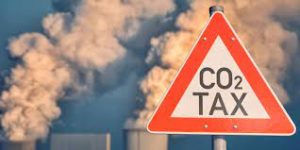 Dozens of nations and many local governments are putting a price tag on greenhouse gas emissions that are increasing flooding, droughts and other costly catastrophes.