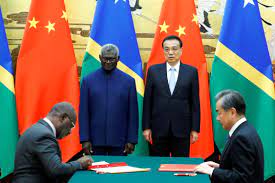 China said it had signed a security pact with the Solomon Islands, a first-of-its-kind arrangement that could pave the way for further Chinese security deals overseas.