Debris From A Chinese Rocket Disintegrated Over The Indian Ocean: 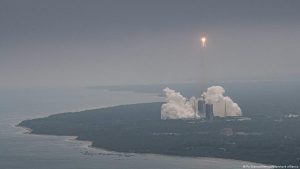 Debris from a Chinese rocket made an uncontrolled re-entry into the Earth’s atmosphere and disintegrated over the Indian Ocean, with remnants falling at a location to the west of Maldives.