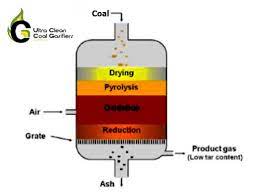 To help India become energy independent, the Ministry of Coal has proposed 50% concession in revenue share to promote coal gasification.