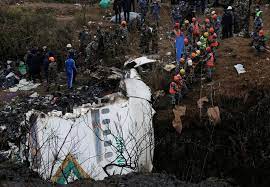 Both black boxes from the crashed Yeti Airlines flight in Nepal have been discovered, Kathmandu airport officials said recently.