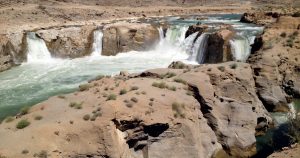 The Taliban has captured Afghanistan’s second-biggest dam after months of fierce fighting in its former bastion of Kandahar.