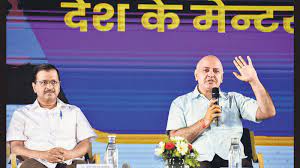 A controversy has broken out over the Delhi government’s flagship ‘Desh ke Mentor’ programme.