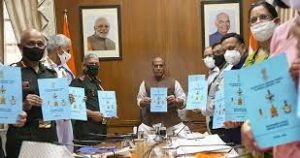 The Ministry of Defence has released the Delegation of Financial Powers to Defence Services (DFPDS), 2021 rules.