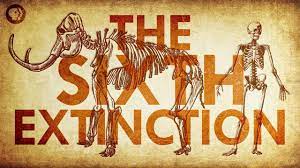 The ongoing sixth mass extinction may be one of the most serious environmental threats to the persistence of civilisation, according to new research.