Final Data On The Dolphin Census: 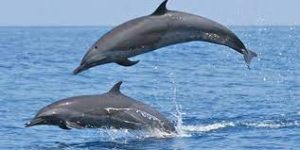 Odisha has released the final data on the dolphin census, indicating a spectacular growth in numbers.