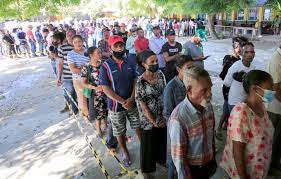 East Timor, also known as Timor Leste, Asia’s Youngest Democracy, held the second and final round of its presidential election.