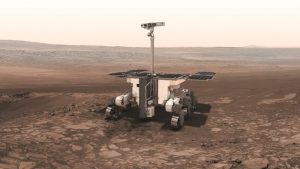 The European Space Agency’s ExoMars 2022 mission won’t launch in September, 2022 as planned after the agency suspended all cooperation with Russia’s space program Roscosmos.

It is a two-stage mission:

ESA and National Aeronautics and Space Administration (NASA) were the original ExoMars collaborators, but NASA dropped out in 2012 due to budgeting problems.