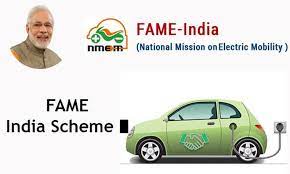 50 Electric Buses launched in Delhi with support under FAME India Phase II scheme of the Ministry of Heavy Industries.