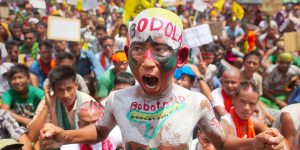 The BTAD district is currently spread over four districts of Kokrajhar, Chirang, Baksa and Udalguri.