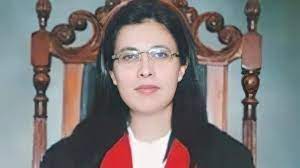 In a historic moment for Pakistan’s judiciary, Lahore High Court’s Justice Ayesha Malik was sworn in as the Supreme Court’s first female judge