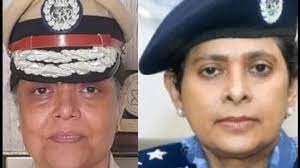 For the first time in the history of Central Reserve Police Force (CRPF), two women officers reached the rank of Inspector General (IG).