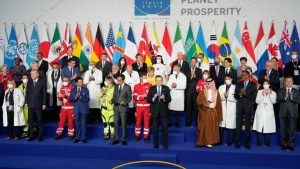 India joined the G20 ‘Troika’ and with this India has started the procedure for taking over the G20 presidency next year.