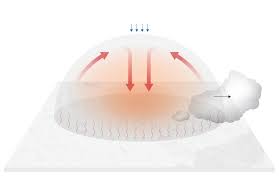 Several countries in Europe recorded their hottest January weather ever in 2023 with temperatures 10 to 20 degrees Celsius above average.